I can mark the measure of a good Lucy Loves recipe in two ways a) the speed with which aforementioned item disappears from our kitchen and b) when I’m writing up the post, I start to salivate and have to get up and rebake that item. I am happy to confirm this Biscoff Crumble Slice lasted a scant two days. And if I wasn’t feeling quite so lethargic, I would so be racing to the kitchen to whip up another batch right now.

If you’ve never tried Biscoff/Biscuit spread before, where on earth have you been? It’s a wonderful soft spread for bread, toast or eating straight from the jar with the flavour of those wonderful little Lotus biscuits you used to get with a coffee, back in the old days. It has a toasted biscuit flavour which pairs so well with the shortbready base and topping. This is a simple tray bake, I do love a crumble slice, but the biscuity layer takes it to a new level. A short spell in the fridge after you’ve cooled your bake makes it easier to cut and sets the Biscoff spread layer. However, you could serve this warm from the oven with cream or custard, should you so desire. Huge thanks to Homemade Italian Cooking for the recipe inspo.

This is such a buttery, crisp, biscuity treat. It’s a real spirit lifter and will, if your family are like mine, fly out of the tin.

Here are the treats involved in this production, including a lovely close up of the star of the show. Surely you recognise the Lotus biscuits? When I was young, cups of coffee came with a little packet of these, so we’ve been friends for years.

Enough reminiscing, let’s crack on with this bake. Pre heat your oven to 160 degrees fan assisted and line your 20cm square tin. I made this in a 23cm tin, as per the original recipe, but found the base was too thin, so go with a smaller tin for a thicker, softer base.

Now, either in your food processor, stand mixer or a bowl with a spoon beat the soft butter, caster and icings sugars until they’re lighter in colour and texture.

Next mix in the vanilla, then fold in the flour to form a soft dough.

Press half the dough into the base of your lined tin forming a fairly level base. The dough is quite crumbly, but persevere and it’ll be fine.

Wrap the remaining half of the dough in some cling and pop in the fridge. Put the base in the oven for around 12 minutes or until just turning golden and it’s puffing up slightly.

Okay, so I may have left mine in a little too long.

Leave this to cool for around 10 minutes then it’s time to empty the whole jar of biscuit spread into the base. Yummmmmm.

Now, with the second half of the dough, crumble it on top of the biscoff layer.

Put this back into the oven for another 20 minutes or until the top is golden and the whole business is smelling amazing.

In an agonising turn of events, leave the bake to cool slightly before removing from the tin. Then pop into the fridge for a couple of hours to set. It will help with cutting this beauty into around 16 good sized squares.

My lockdown diet is reasonably out of control, but that’s ok. These are, as we are told almost everyday, unprecedented times. So what if you eat a couple of bits of Biscoff Crumble Slice? Whatever gets you through it.

You will need a mixer or bowls and a hand whisk and a 20cm square tin, lined

In your stand mixer, food processor or in a bowl beat the soft butter and both caster and icing sugars until the mixture is much lighter in colour and texture.

Mix in the vanilla extract then fold in the flour until you have a soft dough. Press half that dough into the base of your lined tin and bake for around 12 minutes or until just slightly golden and puffy. Wrap the second half of the dough in cling film and pop in the fridge.

Remove from the oven and allow to cool for around 10 minutes. Spread the cooled base with the whole jar of biscuit spread. Remove the second half of the dough from the fridge and crumble it on top of the spread in an even-ish layer.

Put back in the oven for a further 20 minutes or until golden brown and smelling divine. Leave to cool then remove from the tin. Pop in the fridge for a couple of hours to set the biscuit spread layer before cutting into 16 modest squares.

Keep in an airtight tin for around 5 days, but rest assured, it won’t last that long. 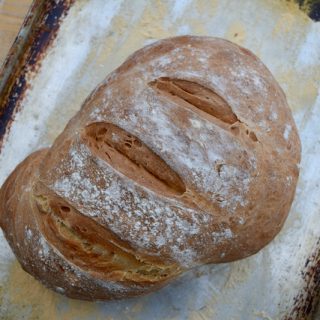 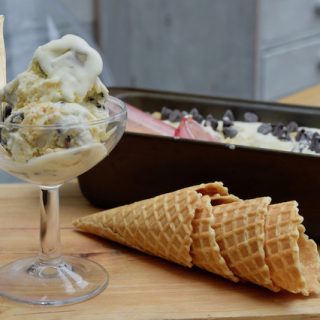 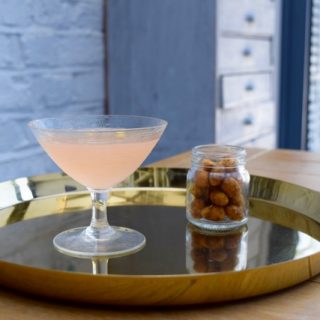 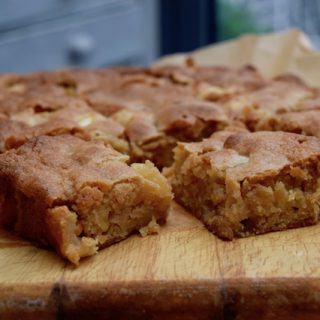 This Friday I give you the Aperol Mist. A classier

These Strawberry and Lemon Squares are a traybake/

Bloody love making my own flavoured gins and this

If you’re currently pretending your garden is a

Words can not explain how simple and how bloody de

This Salt and Pepper Squid reminds me of fondly re

This week I came over all Hugh Fearnley-Whittingst

Can’t be arsed to stand at the stove frying panc