Autumn screams apple cake. It also screams polo necks, damp washing hanging around the house, muddy dogs and casserole that no one in my house wants to eat, but those are all other stories. I bloody love an apple cake and there are several divine recipes here on Lucy Loves which are always in my top 10 most popular posts. However, this Apple Doughnut cake is different. It doesn’t even taste that apple-ish, it just tastes like a bloody great big doughnut.

In America, where this recipe originates from, via the ever wonderful the Kitchn, Apple Cider Doughnuts are a thing, evidently. I had never heard of them and even though this cake was originally called an Apple Cider Doughnut cake, it doesn’t even have apple cider in it. Enough bloody rambling, not only did I want to make this cake because it sounded amazing, I wanted to show off my new bundt tin. I couldn’t afford one of the super expensive Nordic ones, however, this is just as good especially when you use a brilliant non-stick spray to ensure your Apple Doughnut Cakes turns out perfectly every time. The cake itself is so *eek* moist, buttery and has a wonderful cinnamon sugar coating for the full doughnut experience. It has a liberal dollop of apple sauce in it *hence the name* from a jar, or homemade if you’re an overachiever.

This is a beautiful autumnal store cupboard treat, ready to be whipped up at a moments notice and to be enjoyed for the best part of a week. If it lasts that long *it won’t*.

The first time I made this cake, I did make my own apple sauce, but only because I had about 5 tired apples in my fruit bowl winking at me. However, it’s just as good with the perfectly acceptable jarred variety. It looks like a big line up, but as I mentioned, most of these bits and bobs will be lurking at the back of your cupboard.

Make a start by pre heating your oven to 160 degrees fan assisted and by carefully buttering/non-stick spraying your bundt tin.

Next, as it needs time to come up to room temperature, mix the milk and the apple sauce together in a jug and leave to sit whilst you crack on with the soft butter/Stork and caster and soft brown sugar.

I lazily used my food processor, but a stand mixer or bowl with a hand whisk or wooden spoon would be just as good, if a little more like hard work. Beat the butter and sugars together until the mix is lighter in colour and texture.

Add the eggs, one at a time, along with the vanilla extract. Then pour in the oil and beat again.

Then weigh out the flour, baking powder, salt, bicarb and nutmeg and give it a little whisk.

Now, add a third of the flour to your mixer, mix, then add half of the apple sauce and milk mixture and mix again.

Repeat with the next third of flour, then the rest of the apple sauce and milk, then finish with a final third of flour. Mixing well between each addition.

Ta-dah. The batter tastes divine so it’s worth not scraping all of it into the tin, leaving some as a cooks perk.

Level the top then pop in the oven for 45 to 50 minutes. Your Apple Doughnut Cake is ready when it’s golden, firm to the touch and a skewer comes out clean when it’s poked in the middle.

Melt the 20g of butter and in a separate bowl mix the caster sugar, nutmeg and cinnamon. Spread the bottom/top of the cake with the butter then sprinkle with the sugar mixture whilst it’s still in the tin.

Leave the cake to cool in the tin for an agonising 45 minutes then turn out and brush with the remaining melted butter and sprinkle liberally with more cinnamon sugar.

Serve this wonderful cake warm or at room temperature with a cup of tea, or with cream, ice cream or custard for pudding. Or just standing up at the kitchen counter with cinnamon sugar all round your chops.

This is a simple cake, beautiful sponge with a sugary crust. No bells, no whistles, just cake. This is my idea of autumnal baked heaven.

This post contains affiliate links to Amazon. Should you choose to buy via these links Lucy Loves will receive a tiny commission at no extra cost to you. Thank you.

250g apple sauce, homemade or from a jar

Make a start by pre heating your oven to 160 degrees fan assisted and by heavily buttering or spray oiling your bundt tin.

Mix the milk and the apple sauce together in a jug and leave to come up to room temperature.

In a stand mixer, food processor or a bowl with a whisk, beat together the soft butter or Stork and the caster and soft brown sugars until lighter in colour and texture. Beat in the eggs and vanilla extract until blended. Pour in the vegetable oil and mix again until smooth.

Measure the flour, baking powder, salt, bicarb and nutmeg and mix to combine.

Pour into your well oiled/buttered bundt tin, level the top then bake for 45 to 50 minutes. The Apple Doughnut cake is ready when it’s golden, firm to the touch and a skewer comes out clean when poked in the middle.

In a small bowl melt the 20g butter then in another small bowl mix the caster sugar and cinnamon. Whilst the cake is still in the tin, brush the top (which will be the bottom) of the cake with melted butter and sprinkle liberally with the cinnamon sugar.

Serve this sublime cake at room temperature with a cup of tea or as a pud with cream and or custard.

This cake will keep, well wrapped, for a good 3 to 4 days. 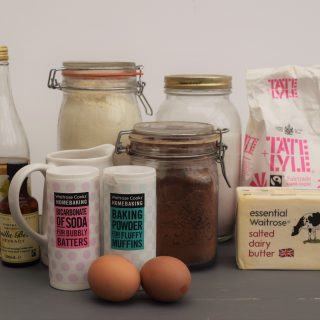 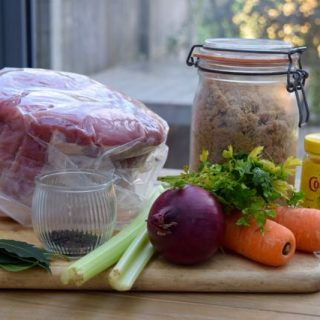 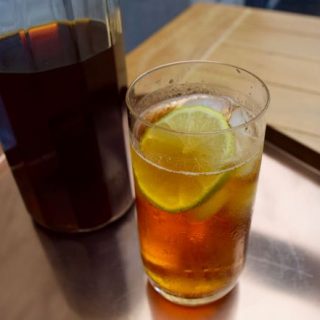 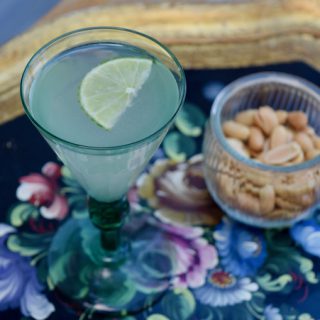