As a child I clearly remember when Elvis died. I don’t know why it stayed with me, I was 7 years old and my parents weren’t huge fans, although his music pretty much changed the world. I remember the outpouring of grief and the stories about his life and in particular his love of a fried peanut butter, banana and bacon sandwich. This cultural 20th century icon had bloody good taste in food albeit a little on the unhealthy side, so as a tribute, here are my Elvis Blondies.

Elvis, bless him, is really being used as an excuse for me to add bacon to a sweet bake. Blondies featuring the sweetness of overripe bananas and the richness of peanut butter are wonderful enough on their own. Add a handful of chopped crisp bacon and they’re onto a new level. The saltiness matches the sweetness and makes these baked squares bloody addictive. Sling in the fact they’re made in one bowl and I may never make another blondie ever again. Thanks to Elvis and a couple of other bastardised recipes for the inspiration.

We all need a bit of a lift once in a while and a bacon laced banana and peanut butter blondie would appear to be just that lift.

I mean, what’s not to like about this line up? I went for crunchy peanut butter because it’s the PB of choice in our house but smooth would be just as good. Likewise I went for streaky bacon, but if you only had back rashers, it wouldn’t be the end of the world.

Make a start on these by lining your 20cm square tin and pre heating the oven to 160 degrees fan assisted. Next cook your bacon until crisp, chop into small morsels then leave to drain on some kitchen paper until needed.

Next, melt the butter in the microwave or in a pan on the stove and add to a large bowl with the soft brown sugar. Whisk until combined.

Now, whisk in the egg then add the mashed banana and peanut butter and mix again until you have a lumpy-ish batter.

Gently fold in the flour, salt and baking powder until it’s just mixed then stir through most of the chopped bacon, reserving a couple of tablespoons for the topping.

Scrape the batter into your lined tin, level the top, then bake for a scant 25 minutes.

The Elvis Blondies are ready when they smell amazing, are firm to the touch and a skewer comes out clean when poked in the middle. Leave them to cool on a wire rack.

While you wait for the blondies to cool, set to making the glaze. This is a simple whisking of icing sugar and maple syrup until smooth.

Pour the mixture onto your barely warm blondies and let it trickle down the sides of your bake. Then scatter on the reserved crisp bacon.

Now cut them into modest squares, or whopper slabs and devour. In true Elvis style, one will not be enough.

Salty and sweet is one of my absolute favourite combinations of all time. These Elvis Blondies are a perfect example of this combo; confirming his talents weren’t limited to singing alone.

You will needs bowls and a lined 20cm square tin

80g peanut butter, smooth or crunchy, whatever you have

Make a start on these by lining your 20cm square tin and pre heating the oven to 160 degrees fan assisted.

Next cook your bacon until crispy. This method is great, or use an air fryer if you have one. Chop into little crisp morsels and leave to cool on some kitchen paper.

Next, take a large bowl and melt the butter in the microwave or in a pot on the stove. Mix in the soft brown sugar and whisk until dissolved. Whisk in the egg until smooth. Mash the soft bananas and add to the mixture with the peanut butter. Whisk again to combine.

Fold in the flour, bicarb and salt until just combined. Finally stir in the crispy bacon, leaving a couple of tablespoons for the topping.

Scrape the mixture into a lined baking tin, level the top, then bake for a scant 25 minutes until the blondies are golden, firm to the touch and smelling amazing. Leave to cool while you make the glaze. Whisk the icing sugar and maple syrup until smooth.

Once cooled, pour on the glaze and sprinkle on the reserved crispy bacon. Cut into 16 squares and devour. Any leftovers *ha ha* will keep in the fridge for a couple of days, well wrapped. 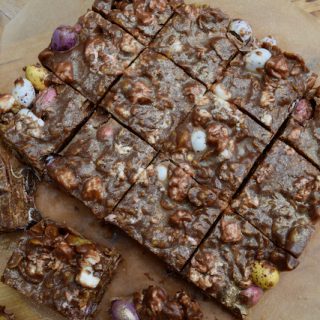