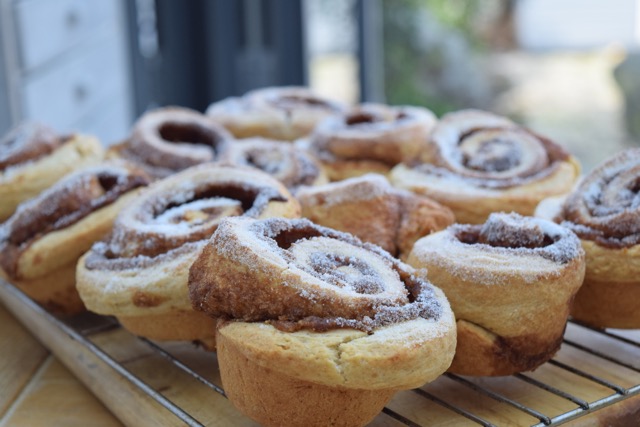 There’s something so special about a Cinnamon Roll or Bun. For me, they are a huge treat, I rarely buy them, so, if I want one, I usually end up baking them. My favourite recipe, for my Giant Cinnamon Roll, is not exactly arduous, it’s just time consuming, something I am always short of. These Easy Cinnamon Buns are the answer, therefore, to mine and your time constricted prayers. These are scone rather than yeast based so are on the cooking rack in just over an hour and in your mouth in slightly less time. Make sure you give me a huge thank you kiss next time you see me, unless I have one of these in my hand, in which case you won’t get a look in.

No yeast means no hanging around. These Easy Cinnamon Buns are made from a simple dough, made by rubbing in butter to flour and sugar and some chosen spices. Pour in cold milk and your dough is formed within seconds. Then, there’s rolling, spreading and cutting to contend with before you pop each bun into a buttered muffin tin. The Cinnamon Buns rise up beautifully only to be turned out of the tins, then, whilst still warm, dipped into a light sprinkling of caster sugar. Devour these warm, as if you needed any encouragement. They are crisp on the outside, soft in the middle with a warming, cinnamon, butter and brown sugar filling. Of course these are divine and have a certain elegance as they come to me via the chosen royal Violet Bakery via Food 52. If they are good enough for Meghan and Harry, they are more than enough for Lucy Loves.

I made this particular batch when, just for a complete change, I may have had a touch too much to drink the night before. All thoughts of slim thighs flew out of the window as I inhaled 3 of them in one sitting. I just couldn’t help myself, warm Easy Cinnamon Buns are like Kryptonite for me. Don’t say I haven’t warned you. 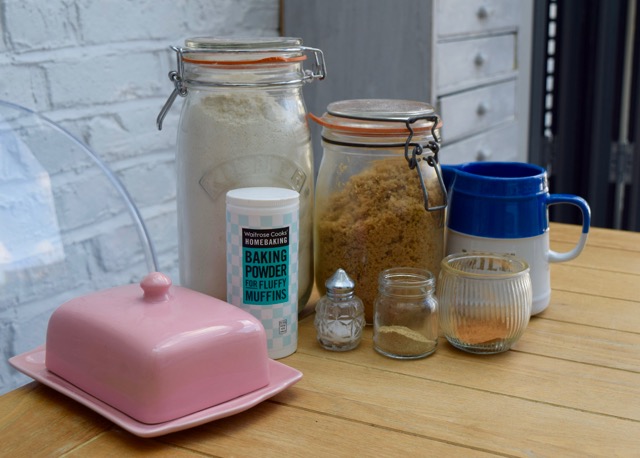 Completely kerfuffle free and not a great table full of ingredients. I bought some ground cardamom from Amazon, but am sure it’s not hard to come by in most supermarkets. Don’t be put off using this, it’s not overpowering in flavour, it just adds a hint of warmth to the dough.

Make a start by pre heating your oven to 170 degrees fan assisted and by buttering a 12 bun deep muffin tin. Then crack on with the filling. Melt the butter in the microwave or a in a small pan. I used my slightly over worked microwave – it gets used so much for melting and by George to make mug mac and cheese after school. In another bowl, stir together the soft brown sugar and the cinnamon for the rest of the filling. 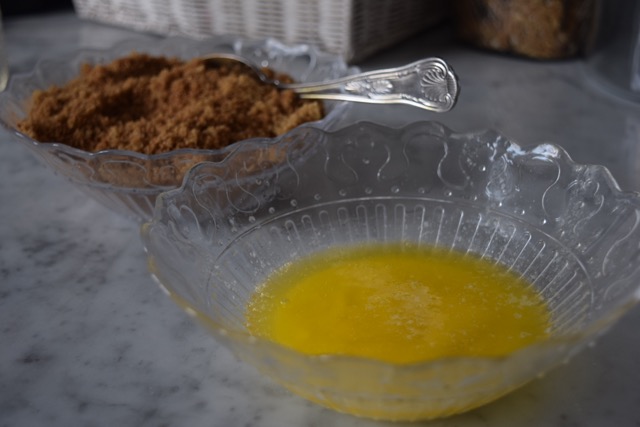 Keep these bowls to one side whilst you make the dough. Take a large bowl or the bowl of your stand mixer and add the plain flour, baking powder, salt, cardamom and the cold butter in cubes. Regarding the salt, the original recipe called for 2 teaspoons which I used, but it was far too salty, so 1 should be more than enough. 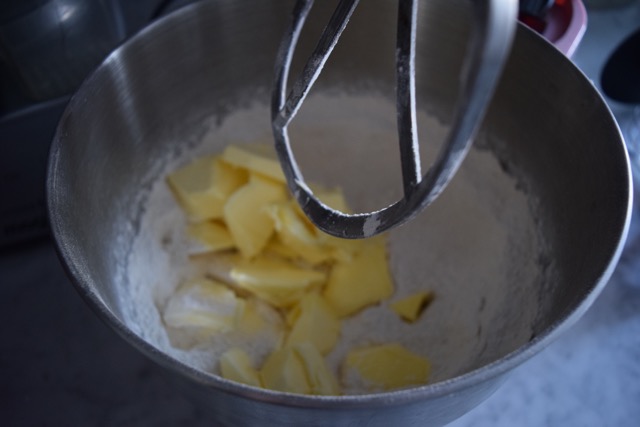 Either in your mixer or by hand, rub the butter into the flour until your mixture resembles fine breadcrumbs. 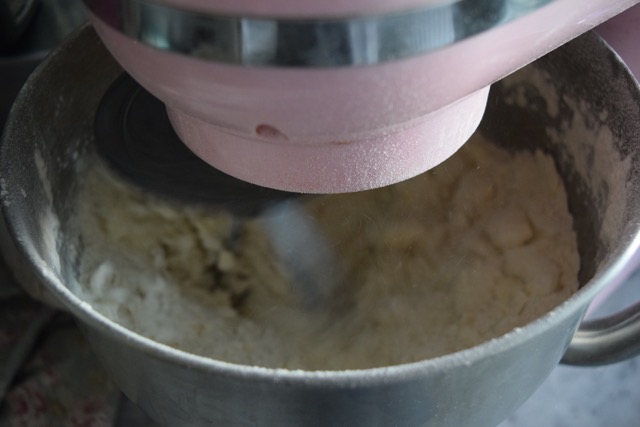 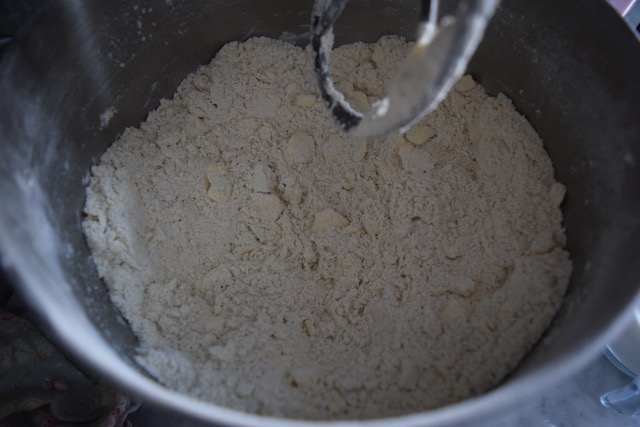 Now, pour the cold milk into this mixture, slowly, until a soft dough is formed. Don’t over mix, just enough to bring the bun dough together. 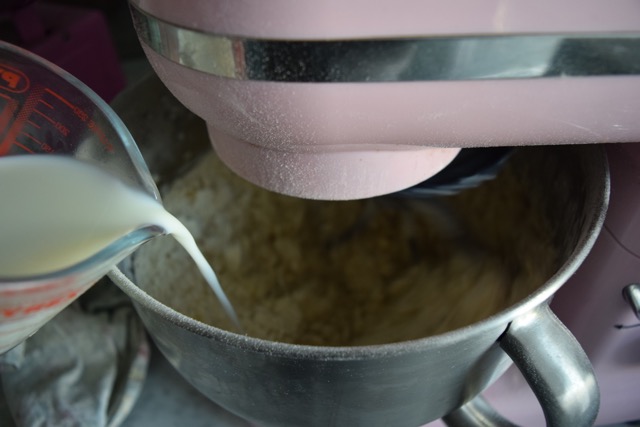 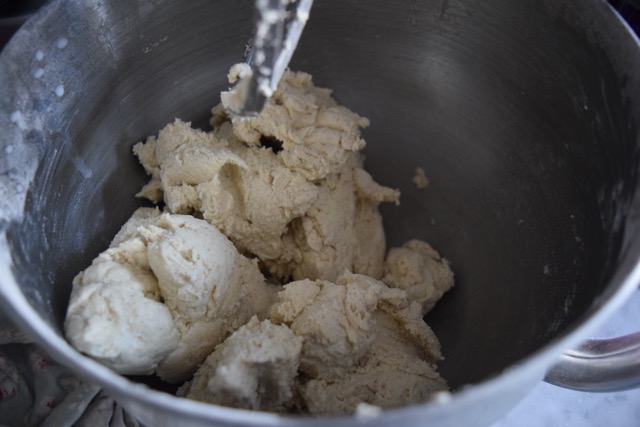 Turn the dough out onto a floured work surface and give it a little knead. Leave it to rest for a minute or two then knead briefly again, then leave for a further 10 minutes. 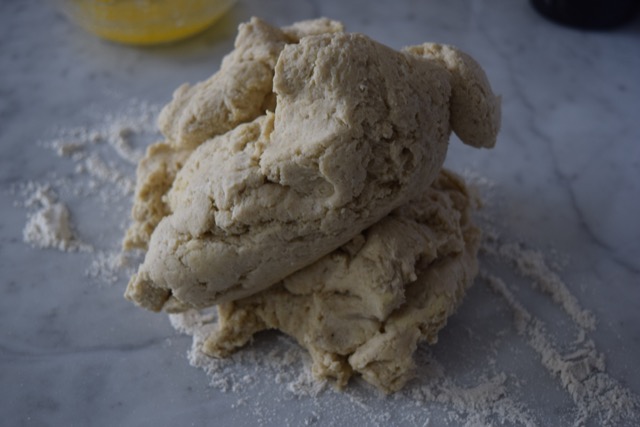 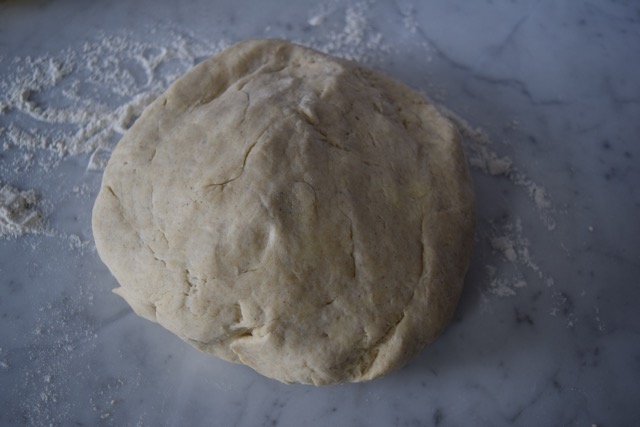 Take your rolling pin and roll the dough out into a large rectangle. Mine was around 16 inches by 12 inches and the dough should be around half a centimetre thick. 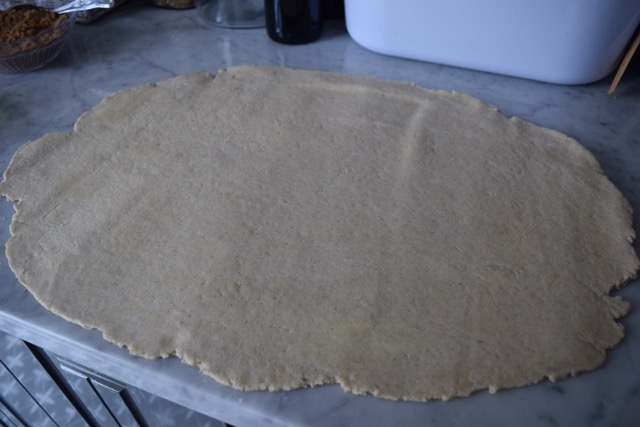 Mine was rather rustic *tatty*, so don’t be too uptight about it. Spread the dough with the melted butter then sprinkle on an even layer of the sugar and cinnamon mixture. 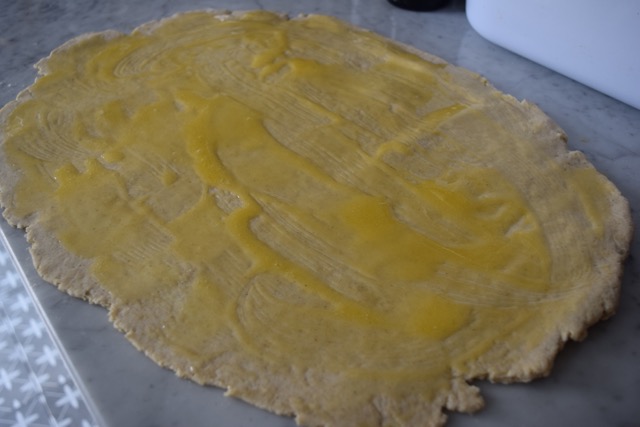 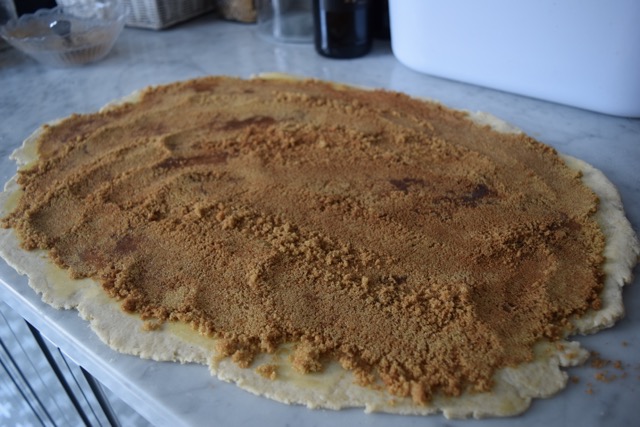 Start to roll the dough up from the long side nearest you. Roll it up as tightly as possible into a long dough snake. Trim the tatty ends then cut the snake in half using a sharp knife. Then cut each half in half again. 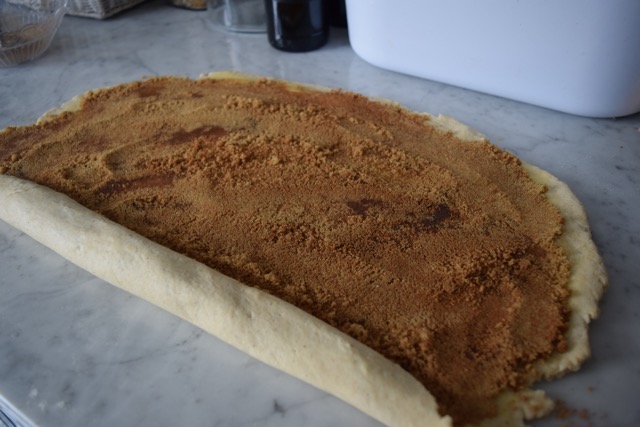 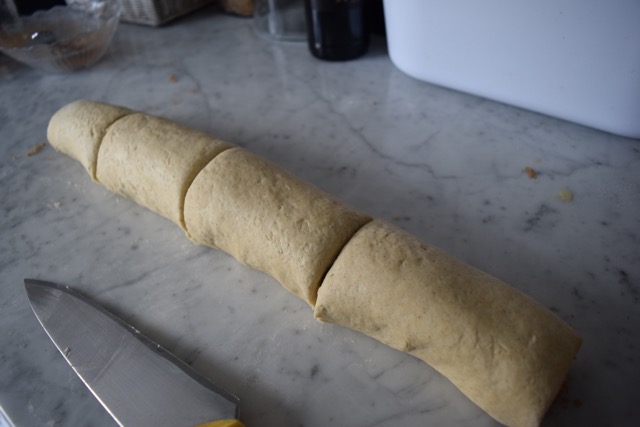 Cut each quarter into 3 leaving you with 12 buns in total. 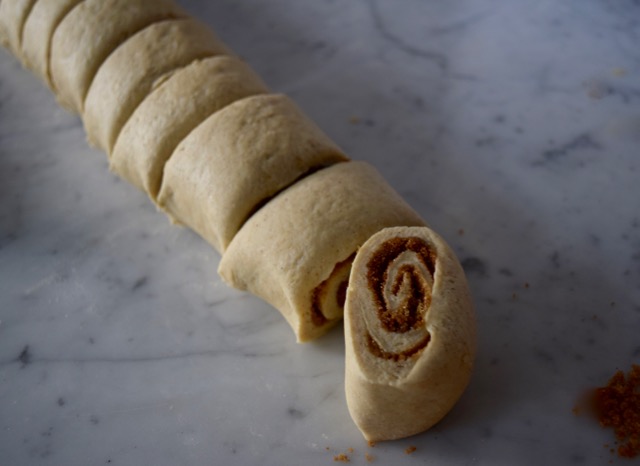 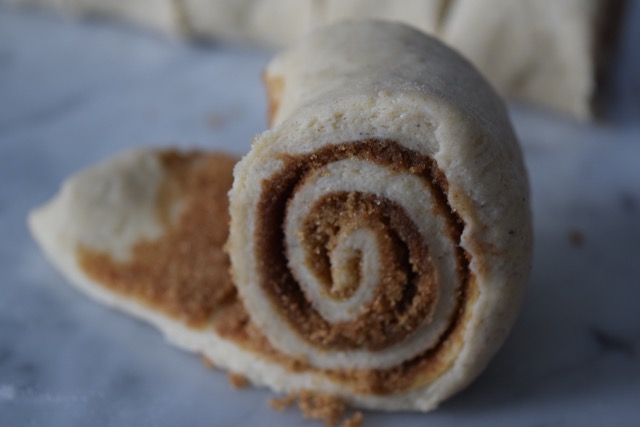 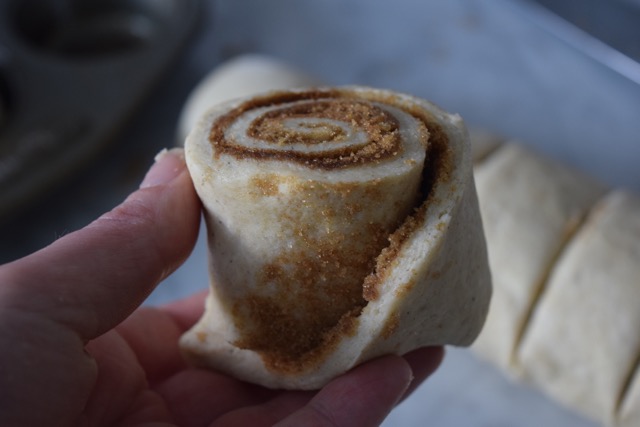 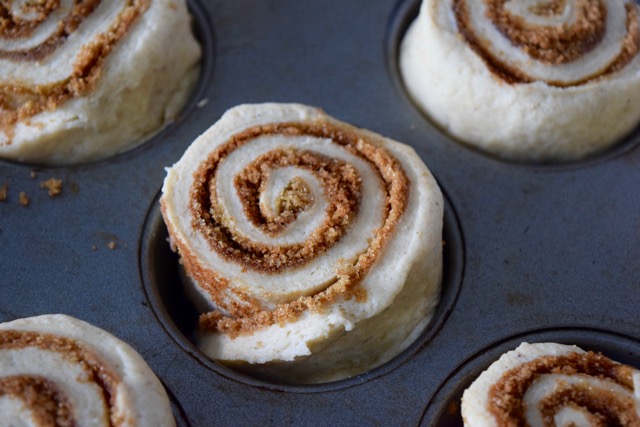 Bake these little beauties for around 25 minutes or until golden, smelling beyond divine and are crisp and firm to the touch. While the buns are hot, help them out of the tins using a knife, onto a cooling rack. 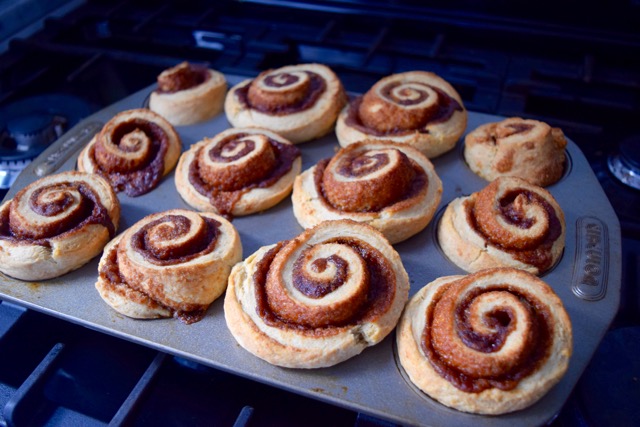 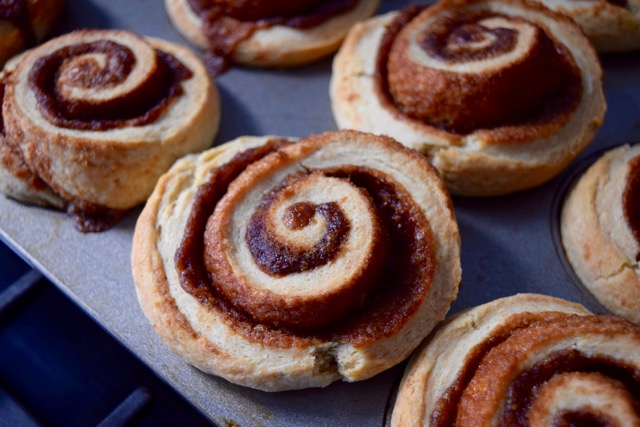 Dip the top of each bun into the caster sugar to give each bun a touch of sugary sparkle. 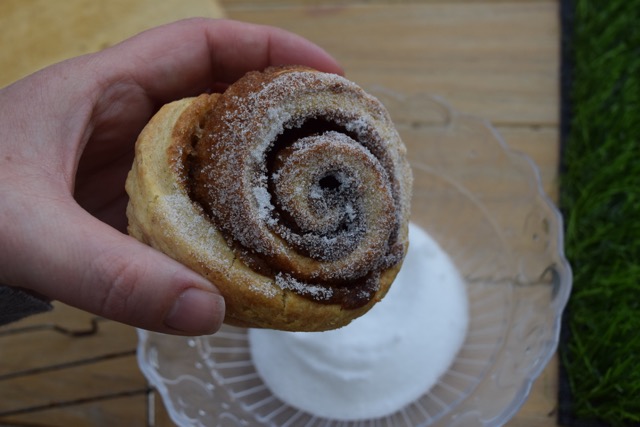 Devour these whilst still warm and three is a perfectly acceptable number it eat, hangover or no hangover. 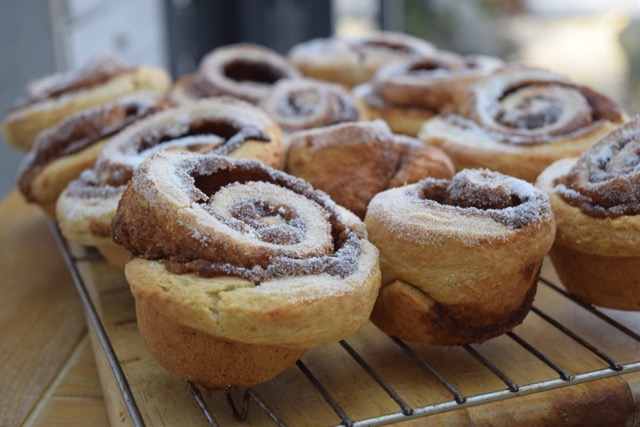 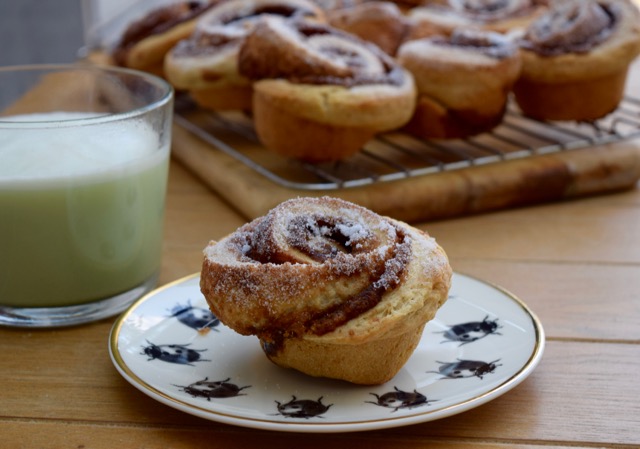 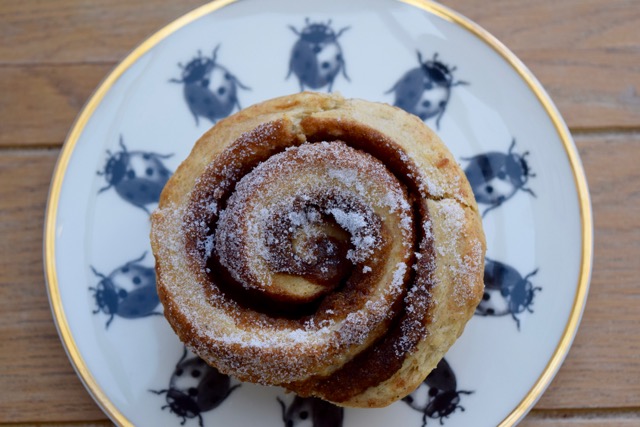 I can barely look at these photos at the moment. It’s 11.15pm, I have to finish writing this, hang out a load of washing and get myself off to bed. However, all I want to do is go and make a batch of these Easy Cinnamon Buns.  Sleep is overrated, I may just follow my heart and my tummy for once.

For the filling melt the butter in a small saucepan or in the microwave and set to one side. In another bowl, mix the soft brown sugar with the tablespoon of cinnamon and also pop this aside for the moment.

For the dough, add the flour, baking powder, salt, cardamom and cubed butter to the bowl of your stand mixer or to a bowl with a hand mixer. Mix until it resembles fine breadcrumbs and there are no large lumps of butter. Slowly pour in the cold milk and mix until a soft dough is formed.

Next, dust the work surface with flour and roll the dough out into a large rectangle. Roughly 16 inches by 12 inches – but don’t worry too much. The dough should be around half a centimetre thick.

Spread the whole surface with the melted butter then sprinkle with the sugar and cinnamon mixture. Roll the dough up starting with the long side, rolling as tight as you can until you have a long sausage shape. Cut off any straggly ends then cut the dough in half, then each half in half then each half into three. You should have 12 rolls in total.

Taking each roll unroll about an inch of dough then tuck that bit underneath to form a sort of base for each roll. Then place the rolls in the buttered muffin tins. Put into the pre heated oven for around 25 minutes or until the buns are crisp and golden and cooked through.

As soon as they are cooked, turn the buns out onto a wire rack. Take a plate of caster sugar and dip the top of each bun into it. Serve warm and try not to eat all at once. These can be reheated and enjoyed for another day or two after baking. 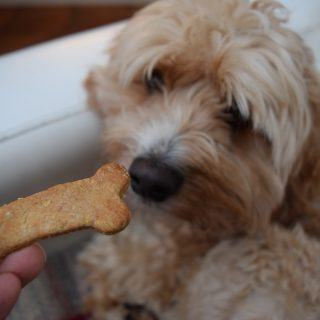 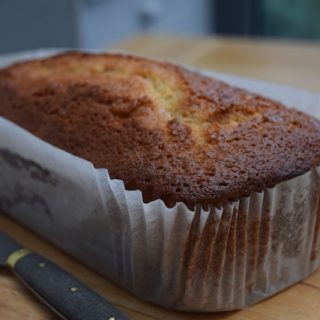 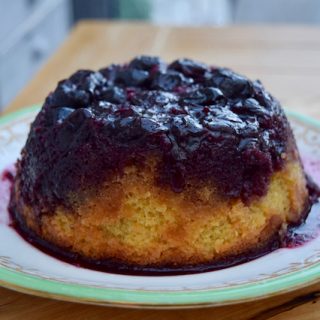 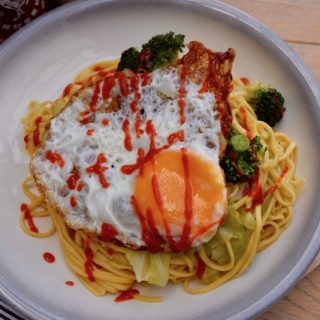