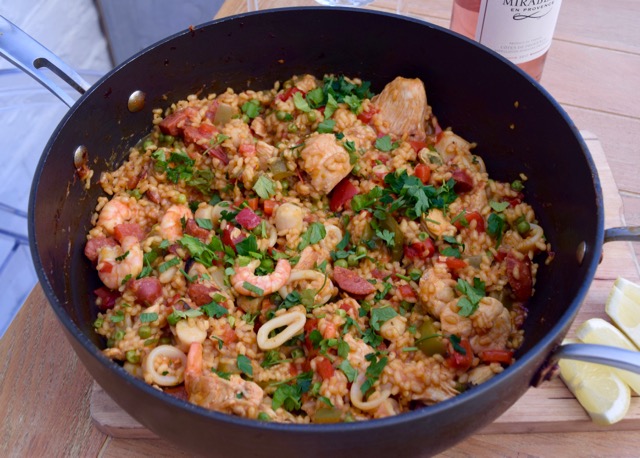 Paella has played a big part in my growing up. This sounds a bit dramatic, but we used to holiday in Mallorca every year so I have eaten a lot of this beautifully seasoned rice dish over my 40 something years and it evokes such memories. I have eaten it on a bizarre pirate based tourist boat trip, on a beach cooked over an open fire and I’ve eaten it at numerous Mallorcan beach bars and every time it’s different. Some contains chicken, some pork and some rabbit *eeek*, most of it is rustic and delicious, some not quite so delicious. My Paella recipe, in our humble opinion, is also delicious.

This Paella recipe has been quite a few years in the making and is based on several different ideas from various sources. The authentic bits come from a lovely friend whose Father is Spanish, the not so authentic bits come from me and my taste buds. It looks like a kerfuffle, but it isn’t, just a bit of sautéing, then popping on a plate, then a final bit of assembly. Each element is cooked separately to incorporate the flavours but to stop everything getting over cooked and mushy. The rice is simmered with some white wine, smoked paprika and just a hint of saffron for extra taste and until it still has a touch of bite.  The seafood option is up to you. I used a bag of raw, frozen seafood from Waitrose. It included a great selection of prawns, scallops, squid and mussels, but if you prefer, add just prawns, or a variety of your choosing. However, if they’re pre cooked, there will be no need to cook off first, just add at the end and ensure they are warmed through.

My Paella is, of course, rustic, but it also tastes amazing and is easily doubled to become quite the crowd pleaser this summer. You could always invest in a Paella pan, for full authenticity, however, cooking it on a beach in Mallorca may be slightly harder to recreate. 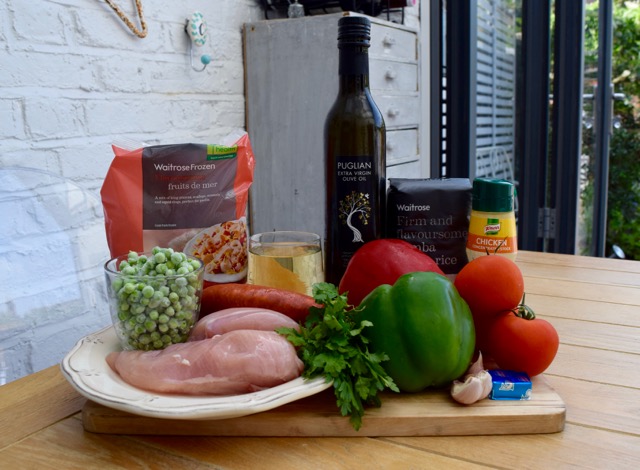 So colourful, and such a wholesome display. Even without the paprika and saffron I forgot until shortly after this photo was taken. 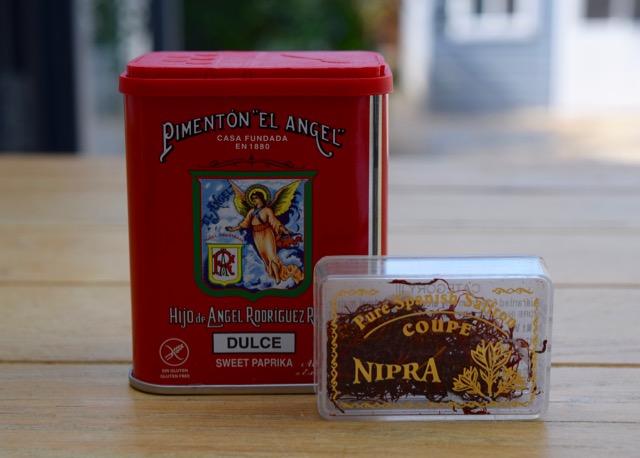 I wasn’t going to not use these two in the shot as they’re so pretty and add so much to the recipe.

Make a start with a large frying pan, wok or paella pan if you have one. Heat a tablespoon of oil over a medium heat then add the sliced garlic cloves. You just want them to be golden and starting to brown so this will only take a minute or two. Don’t burn them, they will taste foul. Remove the golden cloves to a pestle and mortar. 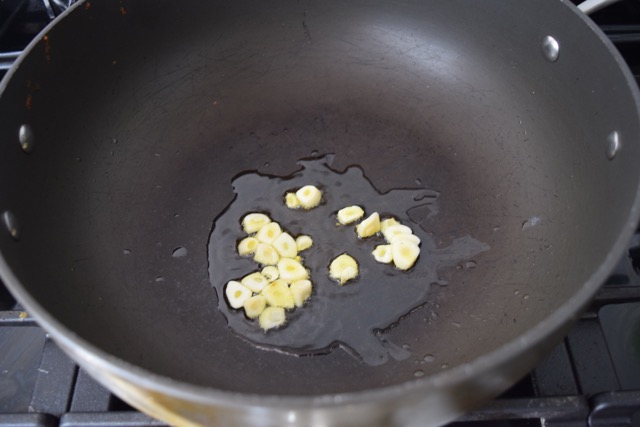 Next, add the half bunch of parsley to the pan and cook for another minute, stir, it may spit, until just wilted and tinged with brown, for a round a minute. Then this joins the garlic in the pestle and mortar. 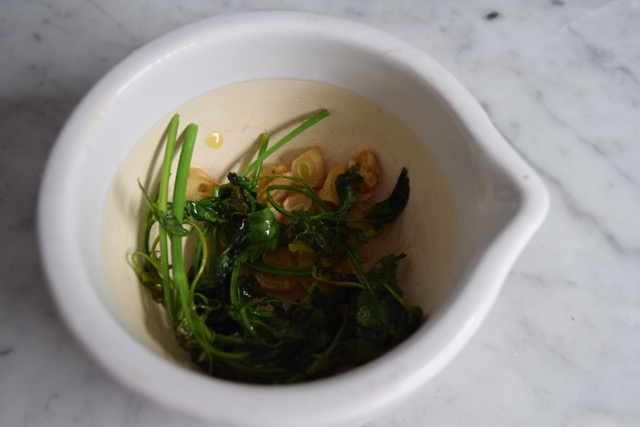 Add a large pinch of sea salt then give it a good mush *technical term* and create a garlicky parsley paste. The stalks take a bit of upper body strength but do your best, this will add a lot of flavour to your dish. 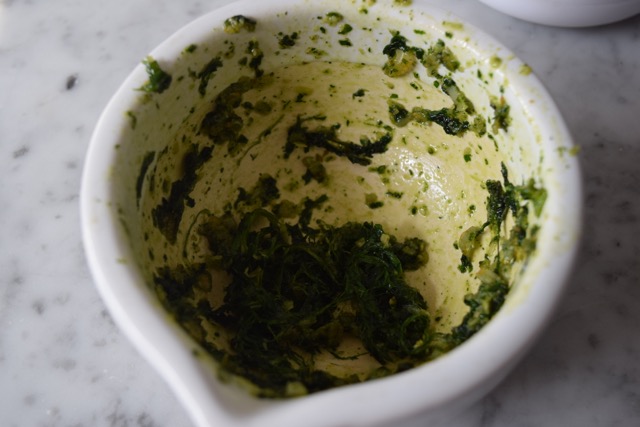 Now, onwards and upwards. Add another tablespoon of oil to your pan and over a medium high heat, fry the chopped/sliced chorizo for a couple of minutes or until just turning golden. Remove to a plate then sauté the chicken breasts in the residual chorizo flavoured oil. 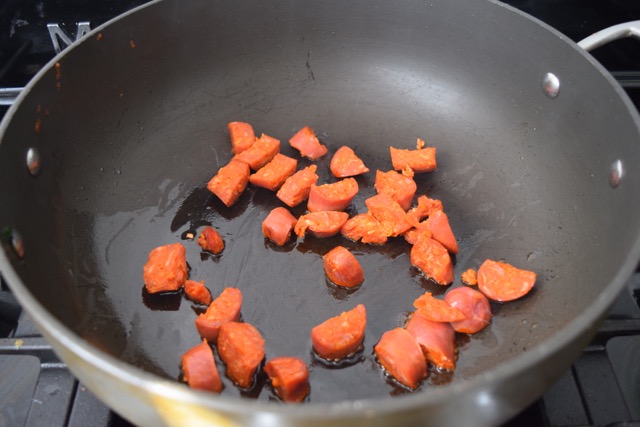 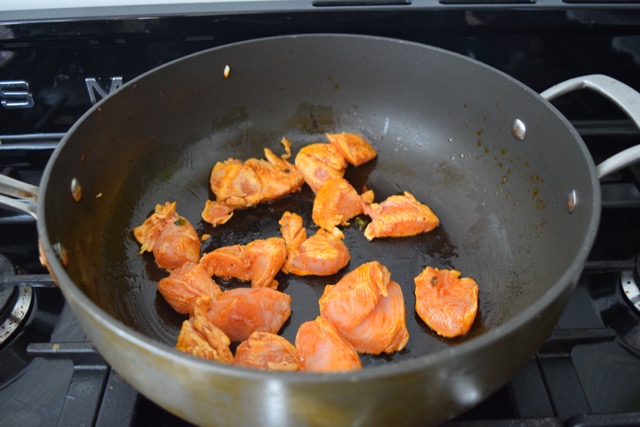 Once the chicken is just cooked through and starting to brown, remove from the pan and pop on a plate with the chorizo. 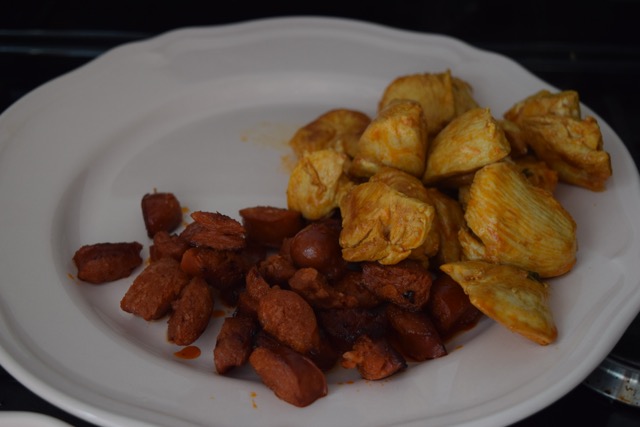 Next, cook of the seafood of your choice. Add a further tablespoon of oil to the pan and cook the frozen seafood for slightly less time than it says on the packet. It will get a second cooking later, so you just want to under cook it a little. If you are using other type of cooked or uncooked seafood, follow the cooking instructions. 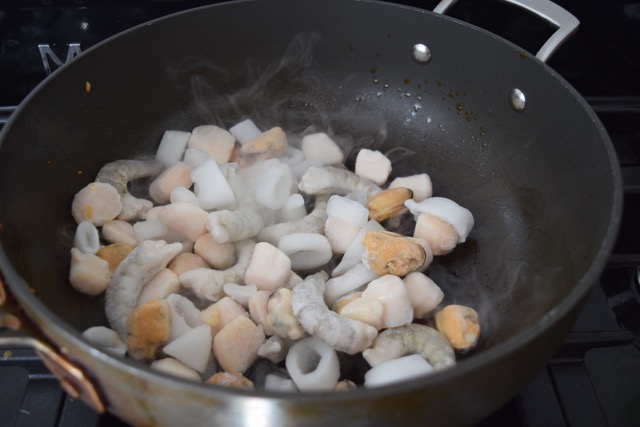 I cooked mine for around 5 to 6 minutes then added it to the plate with the other goodies. My seafood created quite a bit of water, so give the pan a wipe, then added another tablespoon of oil with the chopped peppers and cored and roughly chopped tomatoes. 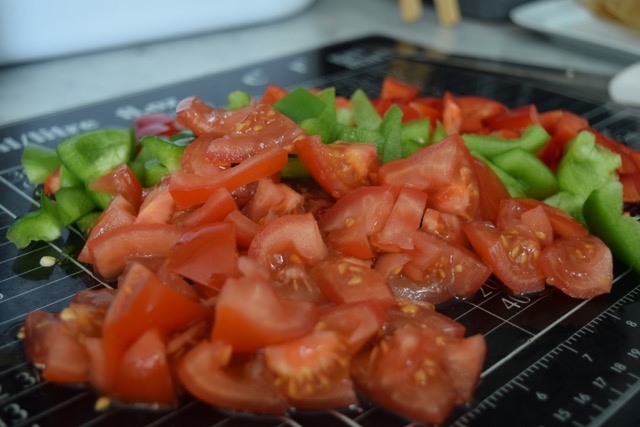 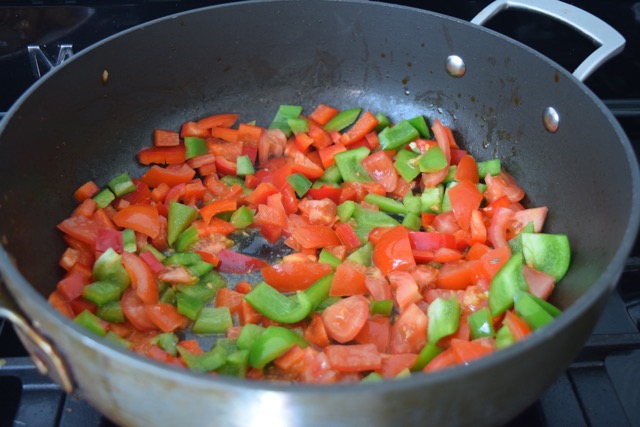 Cook this colourful collection for around 5 minutes or until starting to soften and take on a little colour. Then stir in the paella rice and the smoked paprika, ensuring everything is well mixed. 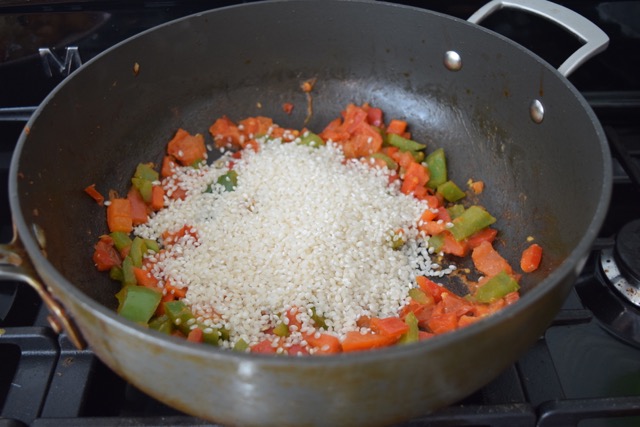 Stir in the parsley and garlic paste from earlier and the glass of white wine then bring the pan up to the simmer and let the alcohol burn off. 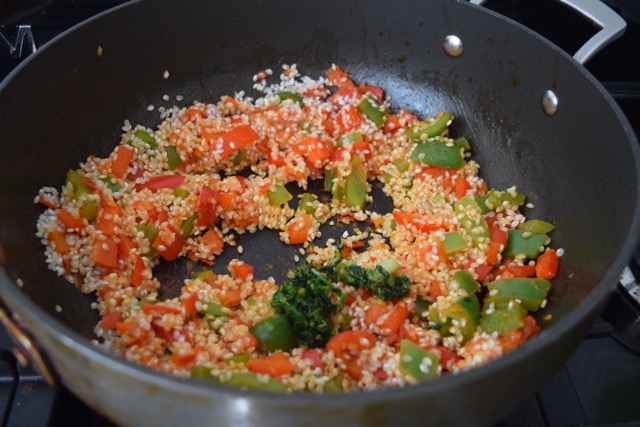 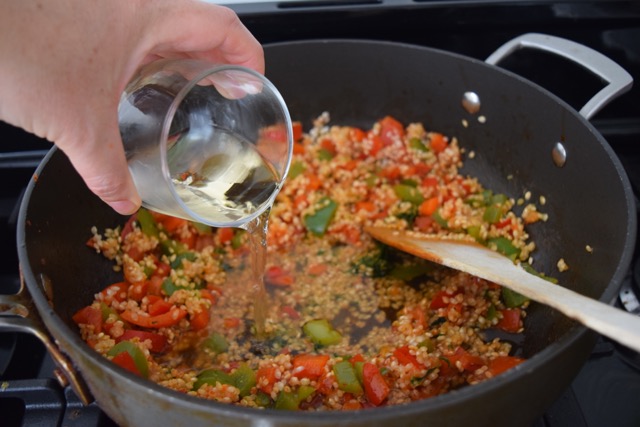 Make the chicken or fish stock adding a good pinch of saffron. Pour this, hot, into the paella base and bring up to the simmer again. Turn down, then put the lid on your pan and cook for around 10 minutes. 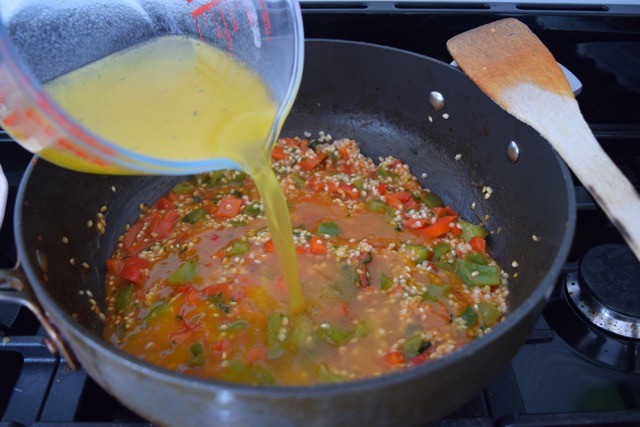 After the ten minutes is up, stir through the frozen peas. Then put the lid back on for another 5 minutes. 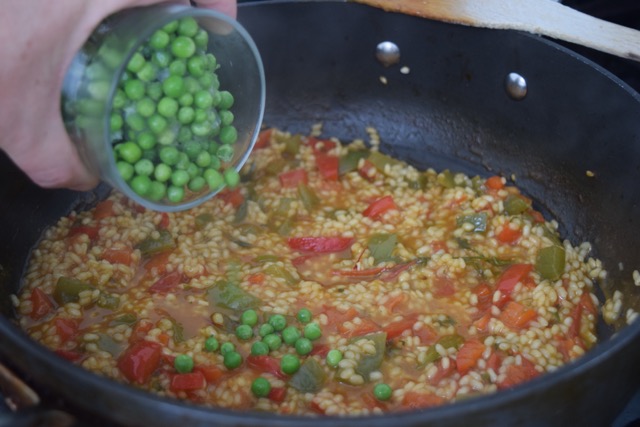 After the 5 minutes, stir through the plate of chorizo, chicken and seafood, along with any juices left on the plate. Then it’s lid back on for a final 5 minutes. If the rice is looking dry, add an additional splash of stock. 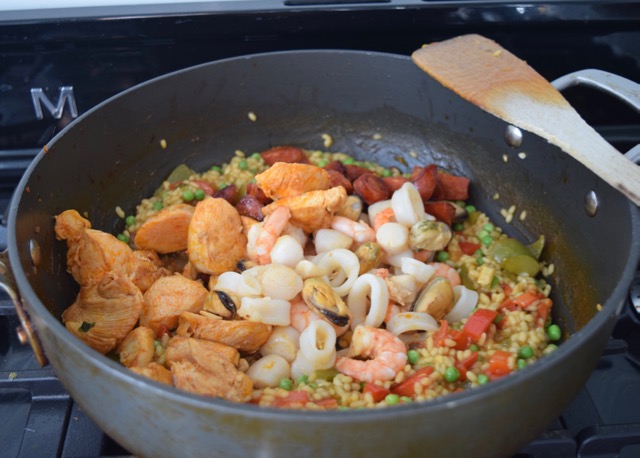 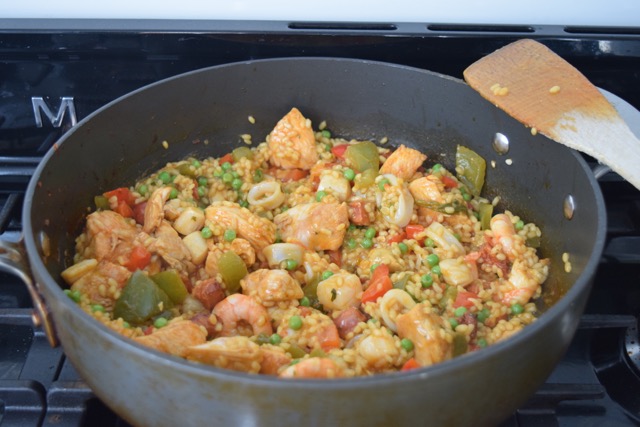 Check your rice to see if it’s soft, but still with a tiny bit of bite, then dress the dish with a spritz of lemon juice, any necessary salt and pepper and a final stir. 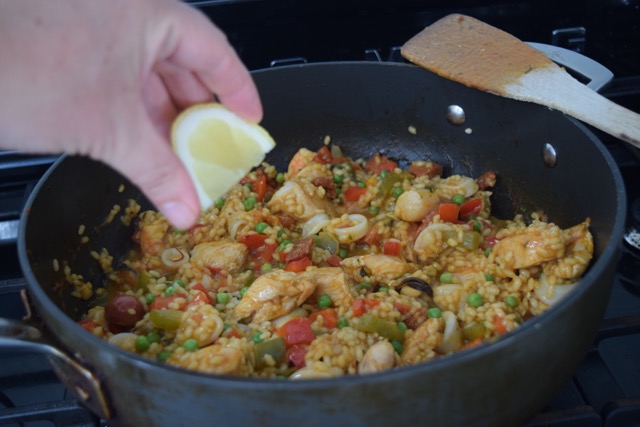 According to the traditionalists, the paella is best left to sit, under a clean tea towel for around 5 minutes, and I am inclined to agree. After this little rest, adorn with a handful of fresh parsley and serve, with lemon wedges and a great big glass of rosé, if you are that way inclined. 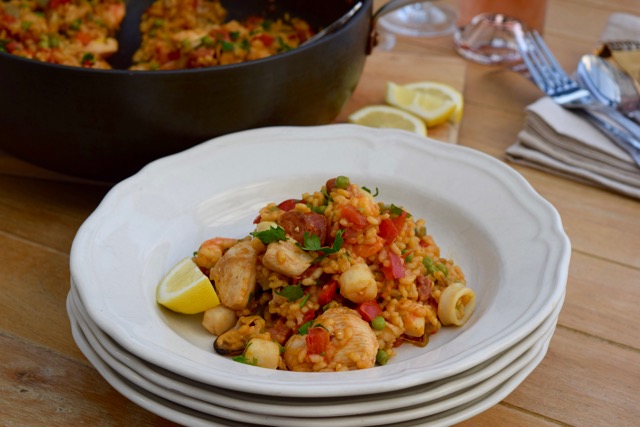 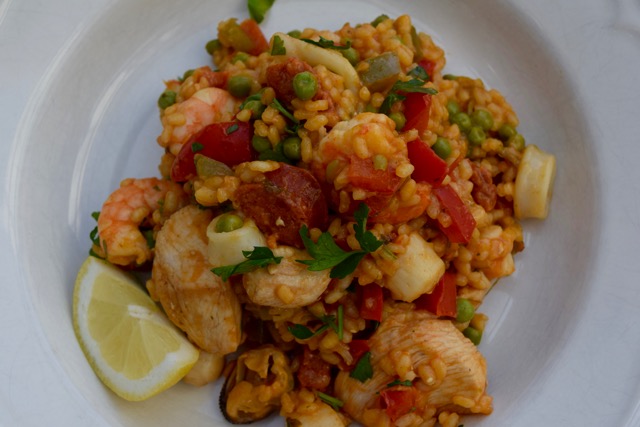 This is such a great summer, fresh dish to eat in the sunshine.  I feel even if I ate this in the winter, it would still transport me to a beach on a Balearic island. I hope you love it as much as we do.

You won’t need anything complicated, just a large frying or paella pan

Oil for sautéing, around 4 tablespoons

400g raw mixed seafood, frozen, mine had prawns, scallops, squid and mussels, or put together a selection of your own

Extra parsley, chopped, for garnish and lemon wedges to serve

Take a large frying pan or paella pan if you have it and add a tablespoon of olive oil. Heat over a medium flame and then add the garlic slices until just turning golden, do not burn them, they will taste horrid. Add them to a pestle and mortar. Add the parsley to the pan and cook until just wilted and starting to brown. Add this to the pestle and mortar with the garlic and a large pinch of sea salt and mash down until you have a sort of green garlicky paste. Don’t worry if the stalks don’t quite mash down, they add great flavour. Pop to one side for the moment.

Add another tablespoon of oil to the pan then sauté the chopped chorizo until just turning golden. Remove to a plate then stir fry the chopped chicken breasts for around 5 minutes, there should be enough residual fat from the chorizo. Once the chicken is just cooked through, add to the plate with the chorizo.

Add another tablespoon of oil to the pan and cook the frozen mixed seafood in the hot pan. I cooked it for slightly less than the packet instructions said as it would get another short burst later, so around 5 to 6 minutes. Cook over a high-ish heat as mine gave off quite a bit of water. Pop the seafood onto your plate with the chorizo and chicken for later.

Chop your red and green peppers into a generous dice then core and roughly chop the tomatoes. If your pan still has water from the seafood, give it a bit of a wipe then add another tablespoon of olive oil. Sauté the peppers and tomatoes for around 5 minutes until starting to soften and colour a little. Stir in the paella rice, coating well, then add the smoked paprika and stir again. Stir through your reserved garlic and parsley paste then pour in the glass of white wine, let it bubble to burn off the alcohol for a minute. Prepare your stock and add the pinch of saffron strands then pour this whilst hot onto your rice and stir again.

Bring this up to the simmer, turn the heat right down,  then pop a lid on for 10 minutes. When the time is up, stir through the peas then return the lid for 5 more minutes. Remove the lid and stir through the chorizo, chicken and seafood. Ensure everything is well mixed, adding a splash more stock if needed, then return the lid for a final 5 minutes.

Check the rice is cooked through then turn off the heat and place a clean tea towel over the pan for another 5 minutes. Serve, sprinkled with fresh parsley in large bowls with lemon wedges on the side. 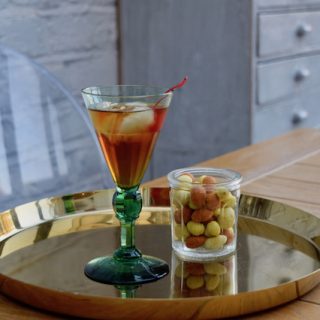 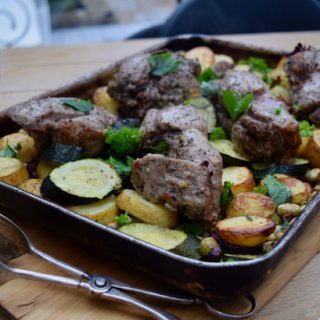 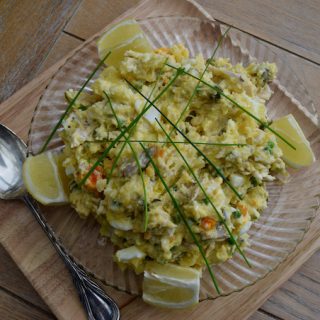 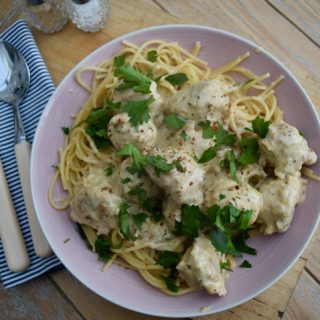