I love a dumpling. I have spent years ordering them from takeaways or buying them frozen from the oriental supermarket, safe in the knowledge they were far too much of a kerfuffle to make myself. Well I wished I hadn’t waited 49 bloody years to try. These Simple Pork Dumplings are, as the name suggests, simple. I’m not saying they don’t take a modicum of effort, but the super tasty results are well worth an hour of anyone’s valuable time.

Reasons I have been put off making dumplings in the past are a) couldn’t be arsed to go and buy dumpling wrappers b) I don’t have a steamer basket and c) fear of cocking them right up. My fears were unfounded, however, as you don’t need to buy wrappers as the pastry is simply flour and boiling water. These dumplings are lightly browned before being steamed in a lidded frying pan, so no need for any special equipment. And finally, I did cock up a couple of them, but it really doesn’t matter. Mine were never going to look like shop bought ones, but I don’t care. They taste so amazing, even if the dumpling bursts or looks a little rustic, who bloody cares. You guests won’t; they’ll just wish you had made a second batch.

I love finding a recipe which is achievable. I hate drama in the kitchen because a certain difficult teenager creates enough in the rest of the house. These Simple Pork Dumplings really are simple, I wouldn’t lie to you, because you’d probably tell me off if I was, and I would hate for us to fall out.

It’s not even a hugely controversial ingredients line up. I had most of the jars and bottles in the cupboard, so I expect you have too. I was so excited to find out how to make these, I have made them 3 times in a week. And I’m still not bored of them, that, I fear, will never happen.

Make a start by making the simple dumpling pastry. Take a medium sized bowl and measure in the flour. Pour on the boiling water, from the kettle is fine, and stir until you have a soft dough.

Tip this onto a floured board or work surface and give it a knead for a couple of minutes until smooth. The dough will feel hot at first so be careful; I have hardy hands, so it was fine to handle.

Pop this into a bowl, cover and leave to rest while you crack on with the rest of the recipe.

For the dipping sauce, measure the soy, rice vinegar, sriracha and sesame oil. Whisk until smooth then pop to one side until later.

Now to the all important filling. Take another bowl and add the 300g pork mince. Add the garlic and ginger, either freshly crushed or use the lazy variety from a jar. Add the sesame oil and soy sauce.

For the cabbage, removed the tough middle stalk then roll up the leaves and slice finely.

Add the cabbage, chopped fresh chives and season with plenty of black pepper. Mix well to incorporate all these tasty ingredients. I used my hands because that’s the kind of girl I am.

Leave this for a moment while you roll out the dumpling pastry. Take the rested dough and divide roughly into 12 equal sized pieces.

Take a piece and roll into a rough 9cm circle. Mine weren’t terribly circular, but do your best. Use a pastry cutter, if you like.

Wet the edges of your circle then spoon a heaped teaspoon of the pork mixture into the middle.

Fold the pastry over the filling and press around it to form a semi circle, sealing it with your fingers.

To create the authentic dumpling shape *well sort of in my case* create 4 little pleats around the edge of the dumpling. All this really involves is making a 4 little folds.

Place your finished dumpling on a plate and repeat with the rest of the dough. You may have left over filling, pop this in the freezer for when you make dumplings again.

Take a large lidded pan and add a tablespoon of oil. Heat over a medium flame and then add 6 of your 12 dumplings, flat side down. Cook for a couple of minutes or until the base is golden brown.

Now, pour around 125ml of water into the pan with the dumplings, turn down the heat, then put the tight fitting lid on and steam them for around 4 to 5 minutes.

Take the lid off and cook for a further minute or two until the water has evaporated.

Keep the 6 dumplings warm while you cook the rest.

Serve these total beauties with the dipping sauce in a pretty bowl, garnished with some extra chives, if you like. These can be a great pre dinner canapé, first course or as a main with some sauteéd pak choi.

I can’t tell you how exciting these Simple Pork Dumplings are. If you have an hour spare, a voracious appetite or guests you would like to impress, then this recipe is for you.

You will just need bowls and pans for this

50g cabbage, finely chopped, this is around 3 leaves

Make a start by making the pastry. Take a small bowl and measure in the plain flour. Pour on the 175ml boiling water from the kettle and stir until you have a soft dough. Turn out onto a floured board, and making sure it’s cool enough to handle, give it a good knead for a couple of minutes. Pop back into the bowl and leave to rest, covered, while you get on with the rest of the recipe.

For the dipping sauce whisk together the soy, rice vinegar, sriracha and sesame oil. Pop into a bowl for later.

For the dumpling filling take a large bowl and measure in the pork mince. Add the garlic, ginger, pepper, soy and sesame oil. Remove the thick stem bit from the middle of the cabbage leaves then roll up and thinly slice. Add this to the mince with the chopped chives. Mix well until thoroughly combined.

For the dumplings, flour your work surface and divide the rested dough into 12 equal-ish pieces. Roll into 12 circles, around 9cms in diameter. You could use a cutter for this, but rough circles is fine. Dot some water with your finger around the edge of each circle then spoon on a heaped teaspoon of the pork filling. Fold over to create a semi circle and press around the filling and seal the edges. Make 4 little pleats around the edge of the dumpling to create the traditional shape. Place on a plate and repeat with the other 11 dumplings. You may have some leftover filling. Pop this into a bag and freeze for next time.

Heat a large lidded frying pan over a medium high heat with a good tablespoon of oil in it. Add 6 of the dumplings, flat side down, and cook for a couple of minutes or until golden on the bottom. Pour around 125ml of water into the pan then pop on the lid to steam the dumplings for a further 5 minutes. Take the lid off and cook for a further minute or until the water has evaporated. Place on a plate and keep warm while you repeat with the rest of the dumplings.

Serve them, piping hot, garnished with some chives with plenty of the soy dipping sauce.

You can reheat any leftovers the next day, but I don’t suppose they’ll last that long. 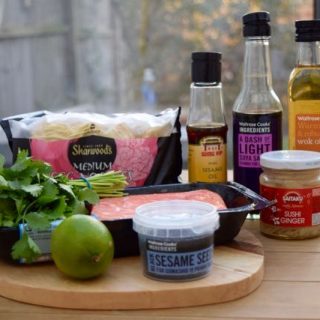 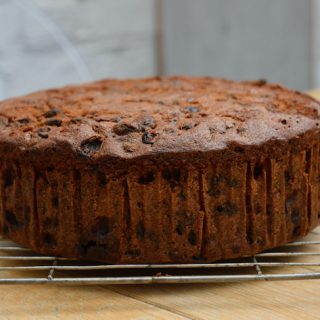 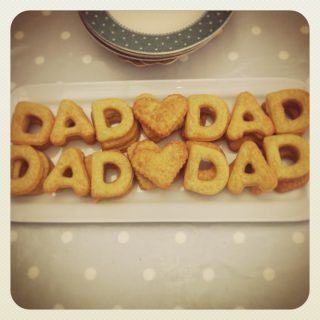 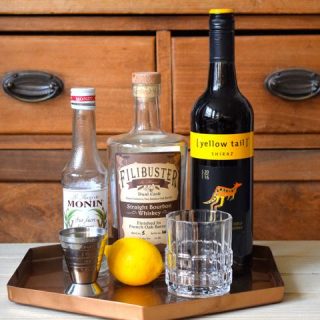